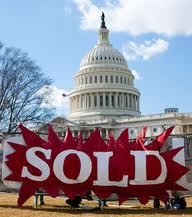 Over 50 organizations have urged President Obama to sign an Executive Order to require disclosure of political spending by government contractors.  For a copy of their letter and to see details, CLICK HERE.

Currently corporations that receive government contracts can secretly funnel unlimited amounts of money to help elect (or oppose) the same lawmakers who are responsible for awarding contracts.   It’s an endless cycle of dark money, corruption, and unchecked spending.

We need to close this loophole in government regulations. And President Obama can do it. It doesn’t require an act of Congress. President Obama has authority to fix the problem with the stroke of a pen.

YOU CAN HELP.   BE PART OF THIS CAMPAIGN.

SEND LETTERS TO THE EDITOR:

ROAD supporets the campaign to urge President Obama to issue an Executive Order to require all government contractors to disclose all political contributions.

Below are three sample letters (from Jonah Minkoff-Zern of Public Citizen)  to the editor that you can use.  Select, edit and create your own. Please submit today,  as the White House is currently considering whether to move forward on this, and media matters.

Three Sample Letters to the Editor:

1). It has been five years since the U.S. Supreme Court’s infamous Citizens United ruling. In this short time, Big Business and billionaires have taken the reins of our political system by spending unlimited sums to influence elections.

Among the players in this pay-to-play game are federal contractors, who legally spend money secretly on elections in exchange for policy that enables them to gain millions through federal contracts.

Republicans have consistently blocked the DISCLOSE Act, which would shine the light on undisclosed contributions. With Congress in a stalemate, it is time for President Obama to act.

Obama, in his State of the Union address this year, said “A better politics is one where we spend less time drowning in dark money for ads that pull us into the gutter, and spend more time lifting young people up, with a sense of purpose and possibility.”

Obama can shine the light on dark money in politics by signing an executive order that would require federal contractors to disclose their political spending.

While an executive order is not a panacea to all the political corruption in our political system, it is a step in the right direction in restoring public transparency and disclosure.

That’s why more than 600,000 signatures have been gathered in support of an executive order, and why rallies took place earlier this month in more than 50 cities around the country in support of this action.

2). In 2010, the Citizens United U.S. Supreme Court ruling gave corporations, associations and labor unions the right to allocate unlimited amounts of money to candidates and campaigns they would like to see promoted or defeated.

Currently, corporate behemoths like Chevron and Lockheed Martin profit from tax-payer subsidized contracts. At the same time, they have the ability to make secret campaign expenditures to help ensure that they continue to get lucrative contracts from the government. Lockheed Martin, the largest government contractor, spends about $15 million annually lobbying. We don’t  know how much it spends to help elect lawmakers.

Because Republicans are refusing to move forward the DISCLOSE Act, it is up to President Obama require the disclosure of federal contractors’ political spending.

President Obama has denounced Citizens United and spoken out against dark money. In his 2015 State of the Union Address, he stated, “A better politics is one where we spend less time drowning in dark money for ads that pull us into the gutter, and spend more time lifting young people up, with a sense of purpose and possibility.”

President Obama must turn his words into action and issue executive order requiring federal contractors to disclose their political spending. With the stroke of a pen, he can make it happen.

More than 600,000 signatures have been gathered in support of an executive order. Earlier this month, rallies took place throughout the country in support of this action.

While an executive order will not correct all the political corruption in our system, it will shine a light on the trail of dark money and restore a fragment of democracy to the people.

3. Regardless of the issues we fight for – better health care, curbs on greenhouse gas emissions and more – change is made more difficult by the capture of our elected officials by corporations and the wealthy. That’s why ending the blight of big money elections must be our first task.

But with Congress stalled, progress on this issue requires the President to take bold and unilateral action.

The President can address a serious flaw in our political system: Currently, corporate behemoths like Chevron, Verizon, Lockheed Martin, and even companies owned by the Koch Brothers profit from tax-payer subsidized contracts.

What’s more outrageous: These corporations can secretly spend unlimited amounts of money to elect (and re-elect) the same lawmakers responsible for awarding them those contracts. It’s an ongoing cycle of corruption, and the loser is the American taxpayer.

But with a stroke of a pen, the President can shine a light on crony capitalism by requiring government contractors to disclose their political spending.

That’s why, on April 2, over 550,000 petition signatures were presented to President Obama and 60 events took place in 30 states and Washington DC calling upon the President to shine the light on corporate corruption of our democracy. I hope he will hear our call.